skip to main | skip to sidebar

Friends, Drunken Barn Dance returns to Michigan this weekend with a slew of shows, NYC friends (the New Benjamin Britton), record store day (2 shows) and a birthday or two.  And Fred Thomas on drums! 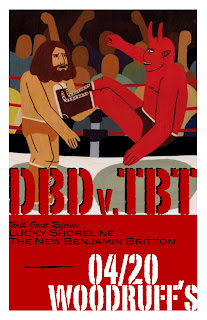 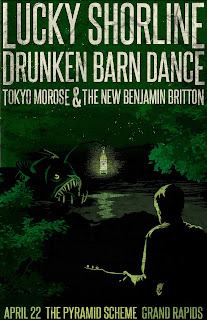 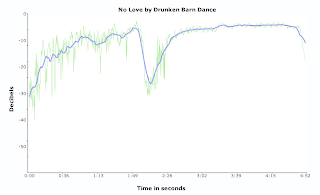 Looking for the Slow Build is a great data visualization app that let's you analyze the decibel level of any song.  I checked several DBD tunes and it appears that No Love has the best Slow Build.
Posted by Scott DeRoche at 1:46 PM 1 comment:

I've been thinking about sisters.  Born together in heavy times.  Weaving gold into shadows.  Forging forward to honey highs.  Trading saviors for stagehands.  Freedom sleeps with a hazy smile.  Fear's a spice in your cabinet.  Love's a riptide.  Jaw-dropping, heart-stopping, bed-hopping, live starry-eyed.  Coal-walking, own your own time.  Take twelve hours for a four hour ride.


Our jam, Honey High, came out last week on ITAV records.  Check it out and the awesome songs by Flatfoot and Sleepy Timmy and Aly Rose that share the 3 song digital EP.


On release, Ryan was convinced that Honey High sounded familiar and upon researching found this quote with respect to Neil Young's seminal On the Beach:


"Throughout the recording of the album, Young and his fellow musicians consumed a homemade concoction dubbed "Honey Slides", a goop of sauteed marijuana and honey that "felt like heroin". This may account for the mellow mood of the album, particularly the second half of the LP."

Remembering is not often a strength of this unit.  But we do try to note our setlists.  Especially when we're playing a crop of new songs.  I'm missing a number of shows from the summer, but here are some...

fairly sure there were some songs played...

*debut
@jackson c. clark song
Posted by scott at 10:20 AM No comments:

As baseball's gearing up for the sweet run to the playoffs, I couldn't be more excited as the Detroit Tigers just put down rival Cleveland three games in a row to secure their best lead over the division all season. Justin Verlander tows the slab tonight for the Tigers. He's looking for his 19th win of the season and I'm in Stevens Point, WI surrounded by Brewers fans. That's fine. I can get behind a ball team that celebrates the craft of beer making, but I'm secretly conflicted considering DBD bassist, Jim Roll, is a Cubs man and I don't know if my flimsy, week-long support of one of the Cubs' NL rivals might tarnish the Jimmer's appreciation of our numerous baseball talks. Sorry Jim. You and I both know that this year isn't one the Cubs will remember.

So, I'm sitting here at Gruu's on Main in the aforementioned Stevens Point, left to my devices, which, as you can see, contain one (1) pint of Point Special, one (1) Raymond Chandler novel, one (1) laptop, and fifteen (15) cigarettes. None of these things are helpful in trying to quit smoking. Except, maybe, the laptop ("lung cancer" image searches...yikes).

I was leaving the Tokyo Steakhouse from a lovely lunch and when I turned on my car, Del Shannon's brilliant "Runaway" was on the radio and I could think of only two things:

1. "Runaway" was recorded in Ann Arbor, MI
2. Watching Justin Verlander's pitching today must be the baseball equivalent to what it was like to hear the synth solo of "Runaway" in 1961

Am I right? 1961! Synthesizers! That vocal! (To get his vocal that high, they slowed down the tape a little, so upon playback it sounded slightly sped up, just like JV's fastballs. I wonder if Verlander actually slows down the opposing batters' minds to make his fastball look faster. I guess, in a sense, that's exactly what he's doing when he hurls a 74 MPH changeup, but I digress.) But seriously, that synth part is like the slider Verlander throws that, after three years of tossing, he still denies is a slider.

And since I'm going down this route, perhaps Brandon Inge's theme is "The Cat Came Back," Magglio Ordoñez's theme is "The Old Man's Back Again," and the Chicago Cubs' theme is... well, let's have Harry Belefonte and Odetta perform it for you:

Sorry Jimmer.
Posted by greg at 3:23 PM No comments:

seasons in the sun

we're apparently not very talkative until the fourth beer and the third month of summer.

after a little adventuring, a couple of injuries, some chemistry jokes, moments of great joy, and some of great sadness, we've planned a burst of kinetic energy.

in April the band recorded a record's worth of songs.  this weekend i'll add some vocals and track a couple more.

we're also playing two sure-fire-hit shows.  we're gonna travel 'round like a pack of dogs.  let us pull your sled.

songs to learn and sing 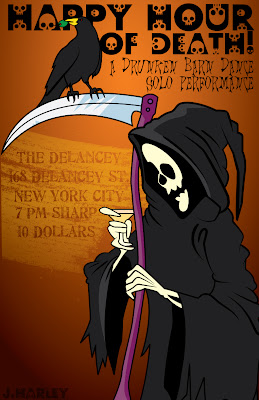 So the April 1st show has adopted a theme.  Happy Hour is a strange beast. Sometimes blissfully pitch perfect, but often an ordeal.  Or a case of straight up bait and switch ("only at the bar" where there are 1.5 seats - WTF).  It can be kill or be killed at Happy Hour.  The Happy Hour of Death.
I have never played a Happy Hour show.  The risk is a sparse collection of disinterested business folk overly concerned with impressing their colleagues or getting some action.   On the other hand, we could have a room full of joyous drink-before-dark vibes and a universal understanding that the heart-rending murder jams in the DBD catalog pair with a martini as well as whiskey...
Which shall it be...
FRIDAY APRIL 1
THE DELANCEY
7PM SHARP
Posted by scott at 11:24 PM No comments:

SUNDAY, APRIL 17 - YPSILANTI, MI
Woodruff's @ TBD w/ White Pines, The Boys Themselves
Midwest May shows are in the works as well.
Posted by scott at 8:48 AM No comments: 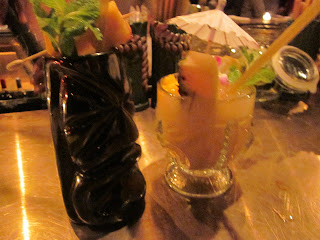 This cold snap simply busted me.  So tonight I found solace at the Hurricane Club, a new-ish upscale tiki bar.  Nice room, diverse drink menu. Great bartenders.  Solid in vibe all around.  First drink was top notch.  Rum, pineapple and curry.  Hell yes.  The next two solid, but not as good.  And I feel surprisingly lucid after 3 drinks in glasses with faces.  This wouldn't happen at Painkiller.
Anyone seen this before?  The health department came into the restaurant, so the bar removed all coconuts, fruit, fresh juice, and basically anything else that makes a bar interesting.  Or tiki.  Go ahead and order a vodka tonic, sir, the cool shit is clamped down for now.
The bartenders were suitably apologetic and comp'd us and everyone around at least one round.  And I am sure there is some risk reward analysis that makes this the right move.  Because sometimes regulators do suck.  Like when you're freezing and need a rum punch...
Posted by scott at 11:10 PM No comments: 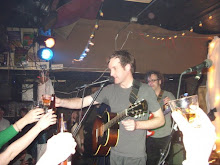